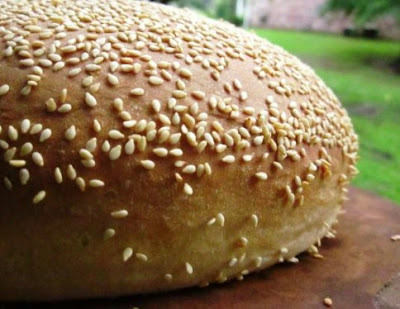 A Muffoletta Loaf
Brief History of The Bread.
Muffoletta bread refers to a special kind of bread.  The bread originated in Sicily hundreds of years ago.  The bread has a unique shape, with a softer crust and denser interior than most Italian bread.  Its form and texture make it ideal for filling and for sandwiches.
Because it is unique, the muffoletta bread is often difficult to find, and many bakers use the muffoletta name for bread that is not made in accordance with the authentic recipe.

Authentic muffoletta bread originated in Sicily hundreds of years ago.  Ingredients include the standard ones for making Italian bread:  flour, water, yeast, salt, shortening and sugar, plus fennel or sesame seeds for the top.

The authentic muffoletta bread from Sicily is baked with a softer crust and a denser interioir than ‘normal’ Italian loaves.  Its shape is round (about 10″ diameter) and lower in height than ‘normal’ loaves.  Fennel or sesame seeds usually top the loaves.  (Fennel seeds often top the muffoletta loaf in Sicily, where the bread was invented, while sesame seeds usually top the muffoletta in the U.S.)
The authentic muffoletta is a pure bread.  That is, the ingredients consist only of flour, water, yeast, sugar, salt, shortening and (for the top) fennel or sesame seeds.  The bread’s ingredients do not include hard wheat, brown flour, olives, rosemary or any of the other exotic additions often added by many artisan bakers.

Note: Traditional French and Italian breads are made with the identical ingredients in essentially the same way. The major difference between them is their shape: French bread tends to a long and round shape, like the baguette, while Italian tends to a round and thick shape, like the ciobatta.

Like all great breads, the muffoletta should be enjoyed and eaten on the same day it is baked.  The flavor peaks within a few hours if not minutes after being removed from the oven.  The texture of the bread reflects the warmth with a soft exterior which contrasts with the dense interior.

The shape of the muffoletta bread makes it ideal for stuffing.  The bread is round, thin and dense.
In Sicily, residents fill the bread with cheese, fish or meat.  In New Orleans, Sicilian immigrants in 1906 created the famous sandwich with the bread, filling it with olive salad, meats and cheeses.  Because the bread is so dense, it absorbs the oil in the olive salad.  As a result, the sandwich retains the liquid ingredients without leaking.  Most Italian loaves lack the density to absorb the olive salad.

Unlike other Italian Bread

For customers in many parts of the world, including the U.S., the surface and texture of the original muffoletta bread are unusual.  The exterior is softer and its interior is denser than customers expect.  Therefore, bakers today often use a different recipe to make a loaf which they call a muffoletta but which does not have the characteristic exterior or interior.  Most so-called muffoletta recipes produce a harder crust and lighter interior than the softer, denser original.
. 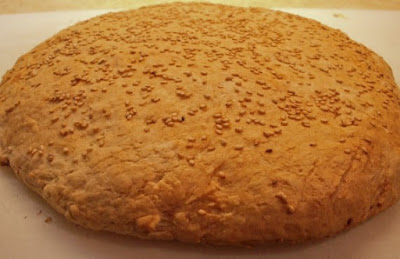 A LOAF of SICILIAN MUFFOLETTA
.

Recall the history:  the Central Grocery made the sandwiches very early in the morning.  The Sicilian farmers in New Orleans purchased the sandwiches to eat at mid-day.  Because the muffoletta bread is dense, the bread absorbed the olive oil and did not leak.  In addition, because the sandwich was not eaten for several hours, the many flavors of the salad, meats and cheeses melded together and grew complex.

As for the salad, hundreds of recipes for the muffoletta sandwich can be found on the Internet.  However, a review of many of the recipes shows that few of them are authentic.  Many include non-traditional ingredients, like lettuce, tomatoes and mayonaisse.  The key to the muffoletta sandwich is simplicity of ingredients, whichi produce a complexity of textures and flavors. 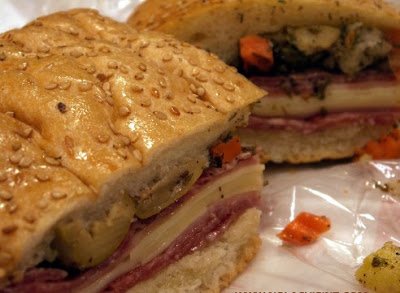 Inside a CENTRAL GROCERY MUFFULETTA
Nobody makes a MUFULLETTA SANDWICH anywhere near as good as at the Origintor of this Awesome Sandwich. A word of  warning if you go there to get one, and you should. The Sandwich is Incrediable and its fun to sit in the old Italian Groceria where the sandwich was invented and beccame famous. However, the owner of the place is the Most Miserable Bastard you could ever want to come across, really miserabel. He has the personality of a DEAD FISH, I kid you not, just look on YELP and you’ll see all the bad reviews of his horrible demeanor. This being said, don’t let it bother you. Simply go in, wait on line, order a half or whole MUFFULETTA, pay for it, get your sanddwich and sit down and enjoy, you want have to deal with the A-HOLE again, and you will be eating one of the World’s Great Sandwiches. Hey therre’s a price to pay for everything.

This classic recipe for Italian bread and produces a muffoletta with a crusty exterior and soft, airy interior.  This recipe complements modern taste for lighter bread.  To that extent, the muffoletta bread from this recipe differs from the heavier and denser original but succeeds with more contemporary tastes.
This bread may be used for the muffoletta sandwich but should not be limited to that use.  The bread is excellent if served alone and is a fine accompaniment with antipasto, wine, cheese or dinner.

In a 2-cup glass measuring cup, combine the water and sugar.  Then stir in yeast, and let the yeast mixture stand until foamy — about 5 to 10 minutes.
In a food processor fitted with the steel blade, combine the flour, salt and shortening.  Then add the yeast mixture.  Process until the dough forms a ball, about 5 seconds.  Stop the processor and check the consistency of the dough — it should be smooth and satiny.  If the dough is too dry, add more warm water, one tablespoon at a time, and process just until blended.  If the dough is too sticky, add more flour, one or two tablespoons at a time, and process just until blended.  When the dough’s consistency is correct, then process the dough 20 seconds to knead it.
Lightly oil a large bowl by swirling the oil to coat the bottom and sides.  Place the dough in the oiled bowl and turn it to coat all sides.  Cover the bowl with plastic wrap and let it rise in a warm, draft-free place, until it has doubled in bulk, about 1 1/2 hours.
Lightly grease a baking sheet.  When the dough has doubled in bulk, punch down the dough and turn out onto a lightly floured surface.  Form the dough into a round loaf, about 10 inches in diameter and place it on the greased baking sheet.  Sprinkle the top of the loaf with sesame seeds, and press the seeds gently into surface of loaf.
Cover the dough very loosely with plastic wrap and let it rise until it has almost doubled in bulk, about 1 hour.
Place a rack in the center of the oven, and preheat the oven to 425F.  Remove the plastic wrap and bake the loaf in the center of the preheated oven for 10 minutes.  Then reduce the heat to 375F and bake for an additional 25 minutes.  The loaf is done when it sounds hollow when tapped on the bottom.
Cool completely on a rack before slicing.
Makes 1 muffoletta loaf.
.
. 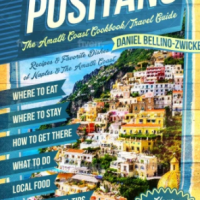 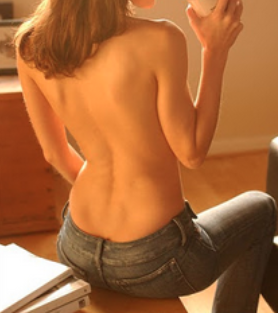